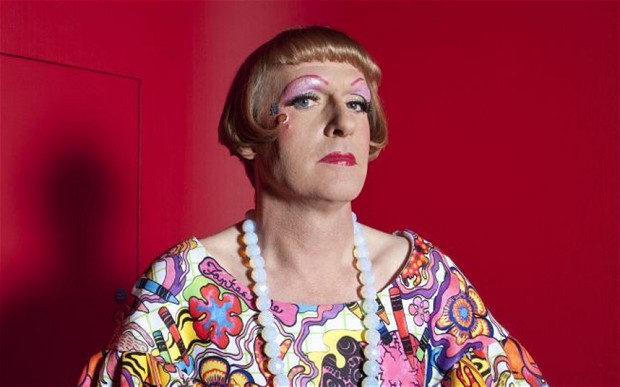 Have you been listening to Grayson Perry’s Reith Lectures on Radio 4? If not, and you like ‘art’ in any form, then you really should!

They are called Playing to the Gallery.

Grayson Perry was awarded the Turner Prize in 2003 and is the first contemporary artist to deliver the Reith Lectures. He is best known for his ceramic works, print making, drawing, sculpture and tapestries as well as being a flamboyant cross-dresser.

Why I particularly am a lover of these lectures because Grayson Perry talks about art in a very down-to-earth, witty, honest and accessible way. I like art, but I’m very much a beginner at liking art. I never know what the different types are, I’m kinda just figuring out what I like best and I rarely know what makes ‘good’ art.

…and perhaps this is why I get so much out of listening to these talks. I find them wonderfully educating and very entertaining at the same time. Grayson is a very good speaker, he brings everything to life with his words.

The latest (3 out of 4) lectures is available to listen now at: http://www.bbc.co.uk/programmes/b03f9bg7. It’s called Nice Rebellion, Welcome In! He asks if revolution is a defining idea in art, or has it met its end?

Perry says the world of art seems to be strongly associated with novelty. He argues that the mainstream media seems particularly drawn to the idea of their being an avant-garde: work is always described as being “cutting edge,” artists are “radical,” shows are “mould-breaking,” ideas are “ground-breaking,” “game-changing” or “revolutionary,” We are forever being told that a new paradigm is being set. Perry says we have reached the final state of art. Not an end game, as there will always be great new art, but that art has lost one of its central tenets: its ability to shock. We have seen it all before.

My favourite sound bites from the lecture were:

“Art is in it’s end-state. Anything can be art!”

“Art chases technology, rather than leads it.”

“Artists are the shock troops of gentrification”

“The art world is a perfect R&D department for capitalism”

“There is no Avant-Garde any more.”

“We live in a globalised pluralistic art world…..a lot of it is rubbish…..but some is really good!”

If those pique your interest, have a listen. This one is 33 mins long (+ questions from the audience at the end if you want to listen to those)

If you’d like to listen to the first two lectures, here they are:

We live in an age when many contemporary artists follow the example of Marcel Duchamp, who famously declared that a urinal was a work of art. It sometimes seems that anything qualifies, from a pile of sweets on a gallery floor to an Oscar-winning actress asleep in a box. How does the ordinary art lover decide?

In a lecture delivered amidst the Victorian splendour of St. George’s Hall in Liverpool, Perry analyses with characteristic wit the common tests – from commercial worth to public popularity to aesthetic value. He admits the inadequacies of such yardsticks, especially when applied to much conceptual and performance art. And he concludes that in his opinion, the quality most valued in the art world is seriousness.

In the first of four lectures, recorded in front of an audience at Tate Modern in London, the artist Grayson Perry reflects on the idea of quality and examines who and what defines what we see and value as art. He argues that there is no empirical way to judge quality in art. Instead the validation of quality rests in the hands of a tightknit group of people at the heart of the art world including curators, dealers, collectors and critics who decide in the end what ends up in galleries and museums. Often the last to have a say are the public.

Perry examines the words and language that have developed around art critique, including what he sees as the growing tendency to over-intellectualise the response to art. He analyses the art market and quotes – with some irony – an insider who says that certain colours sell better than others. He queries whether familiarity makes us like certain artworks more, and encourages the public to learn to appreciate different forms of art through exploration and open-mindedness.