For the last few weeks I’ve been testing a Huawei P9 cameraphone. It’s got a dual camera making it arguably one of the best, if not this best, cameraphone currently on the market. 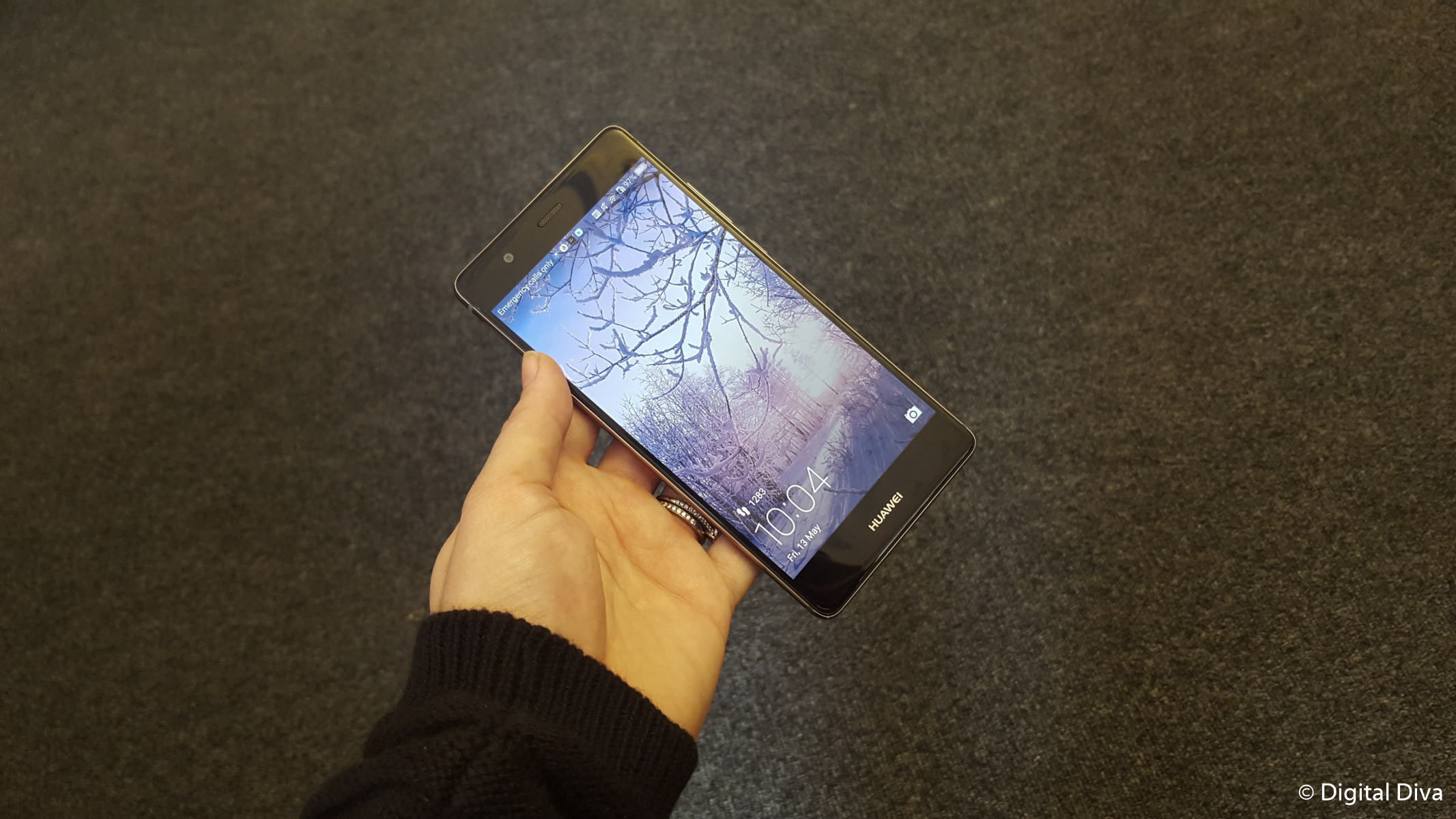 I’m not going to review the Huawei P9 like you’d see on something like TechRadar or PocketLint…those guys are seriously knowledgeable about tech and if you want to know all the specifications and techy detail of the Huawei P9 then I would definitely recommend reading those reviews.

I’m reviewing the Huawei P9 as a blogger…for the common uses of a blogger/vlogger…and for that of a tech-savvy gal about town! I’ve always been into gadgets, I tend to get a new smartphone every 12 months at the very least and I really hammer my phones….I use them constantly until their battery life creaks and their systems grind to the halt. I’m currently using a Samsung Galaxy S6 which I’ve been very happy with. Great camera, good video…fast and lots of storage. I was keen to see how the Huawei P9 would compare.

Let’s start with the camera, because let’s face it…that is what this smartphone is all about (for me).

The rear-facing camera is actually two cameras, developed in conjunction with Leica. If you don’t know who Leica are…they create amazing cameras, so this partnership is pretty damn impressive. 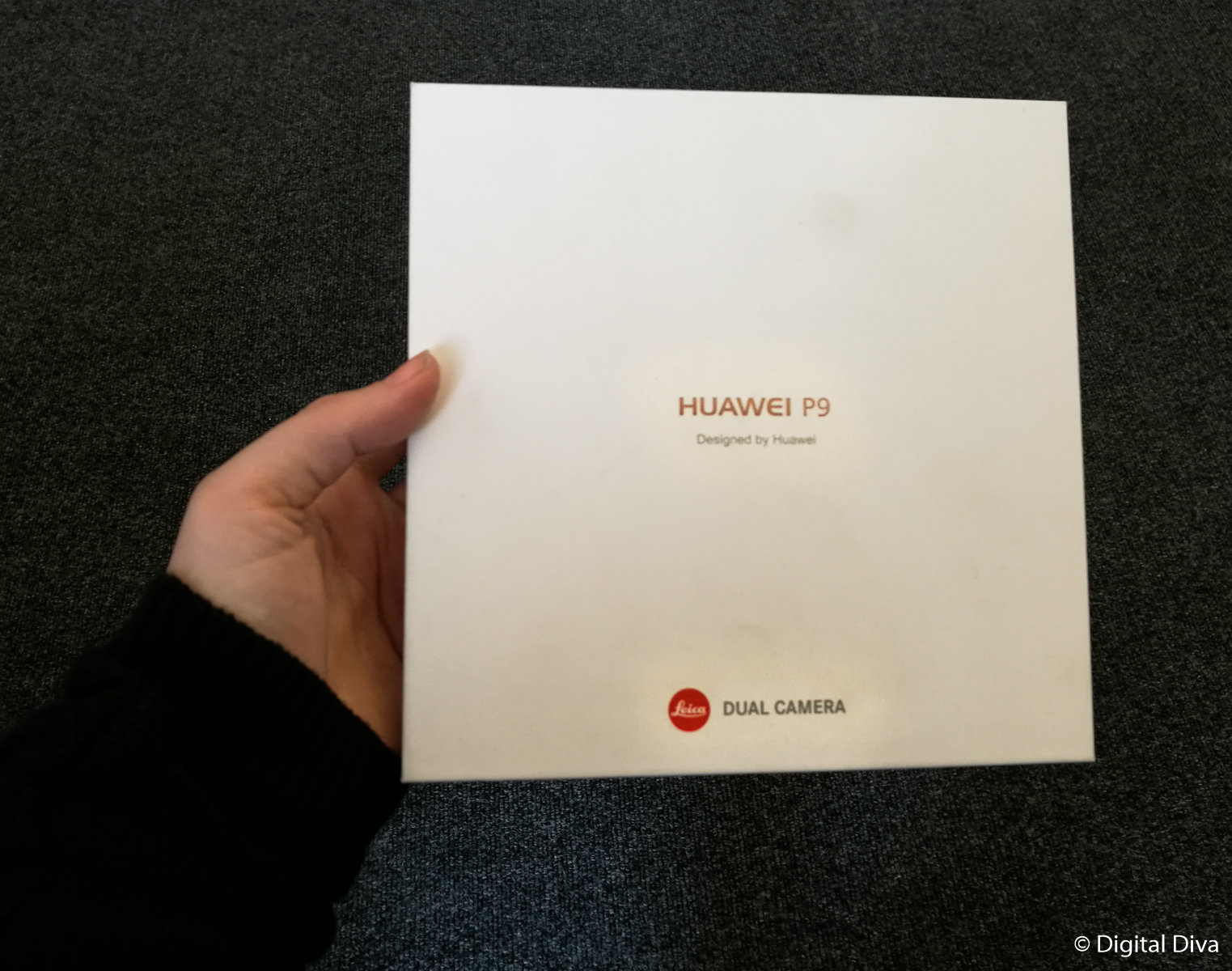 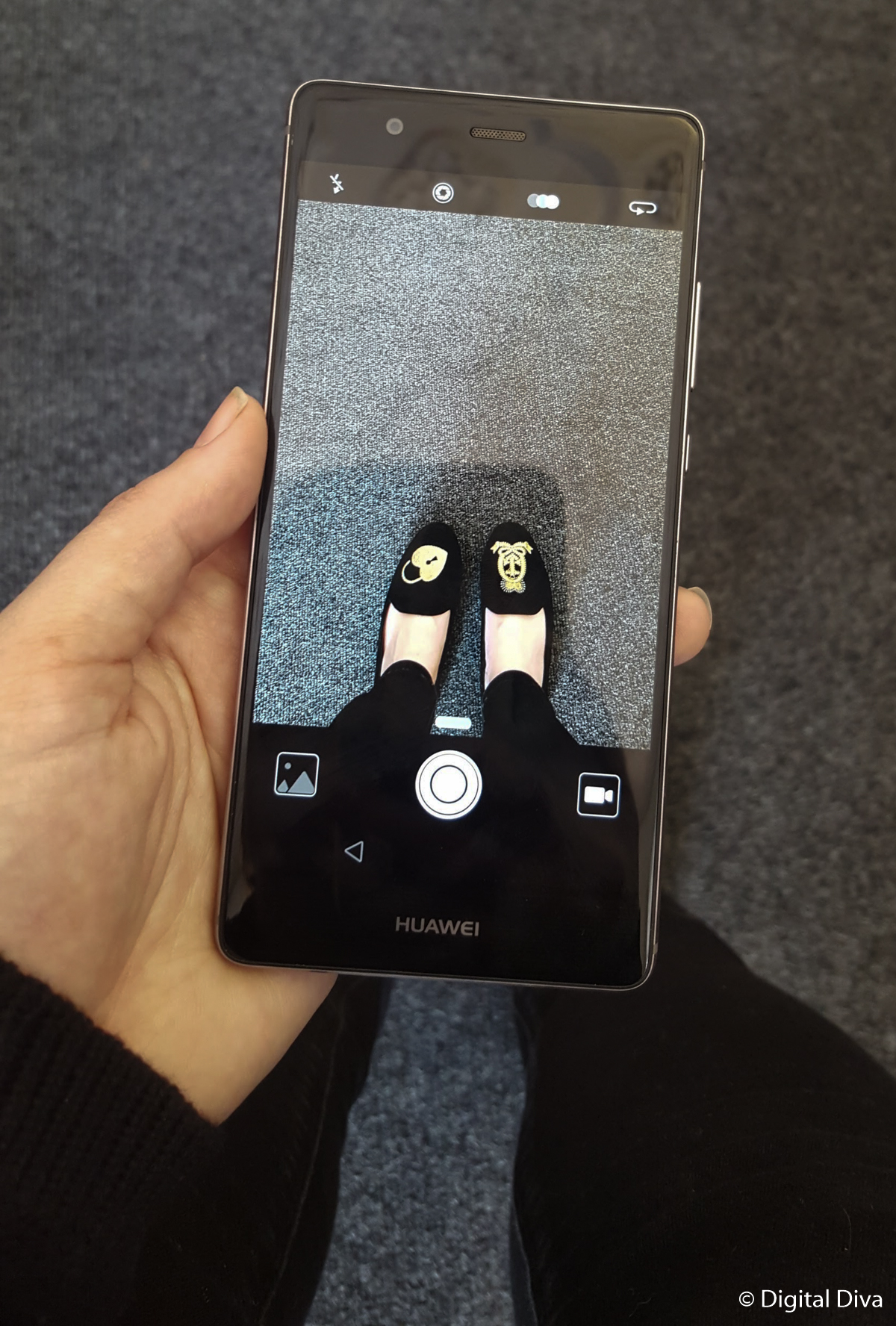 …with lots of modes to choose from: 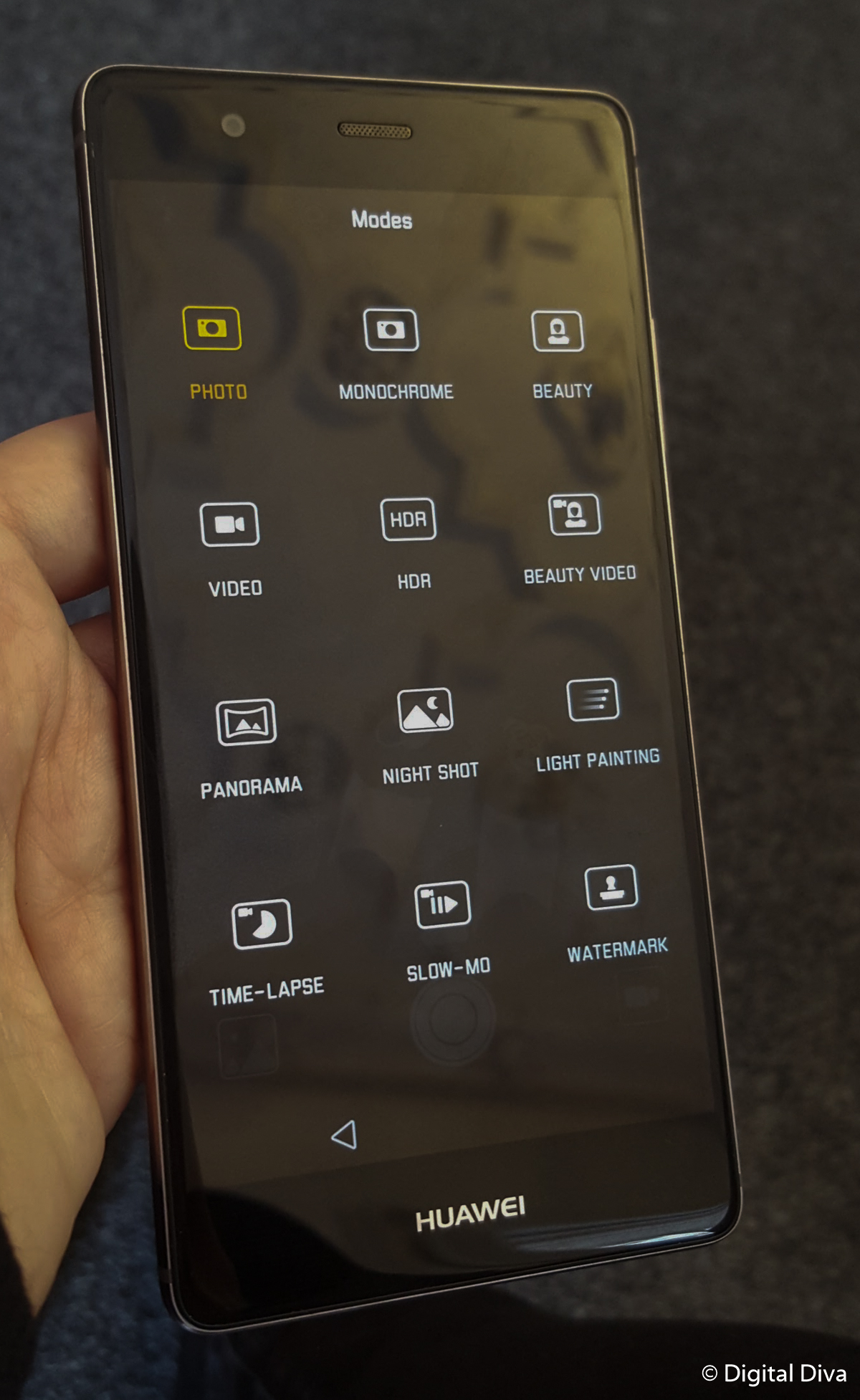 …and lots of settings to play with: 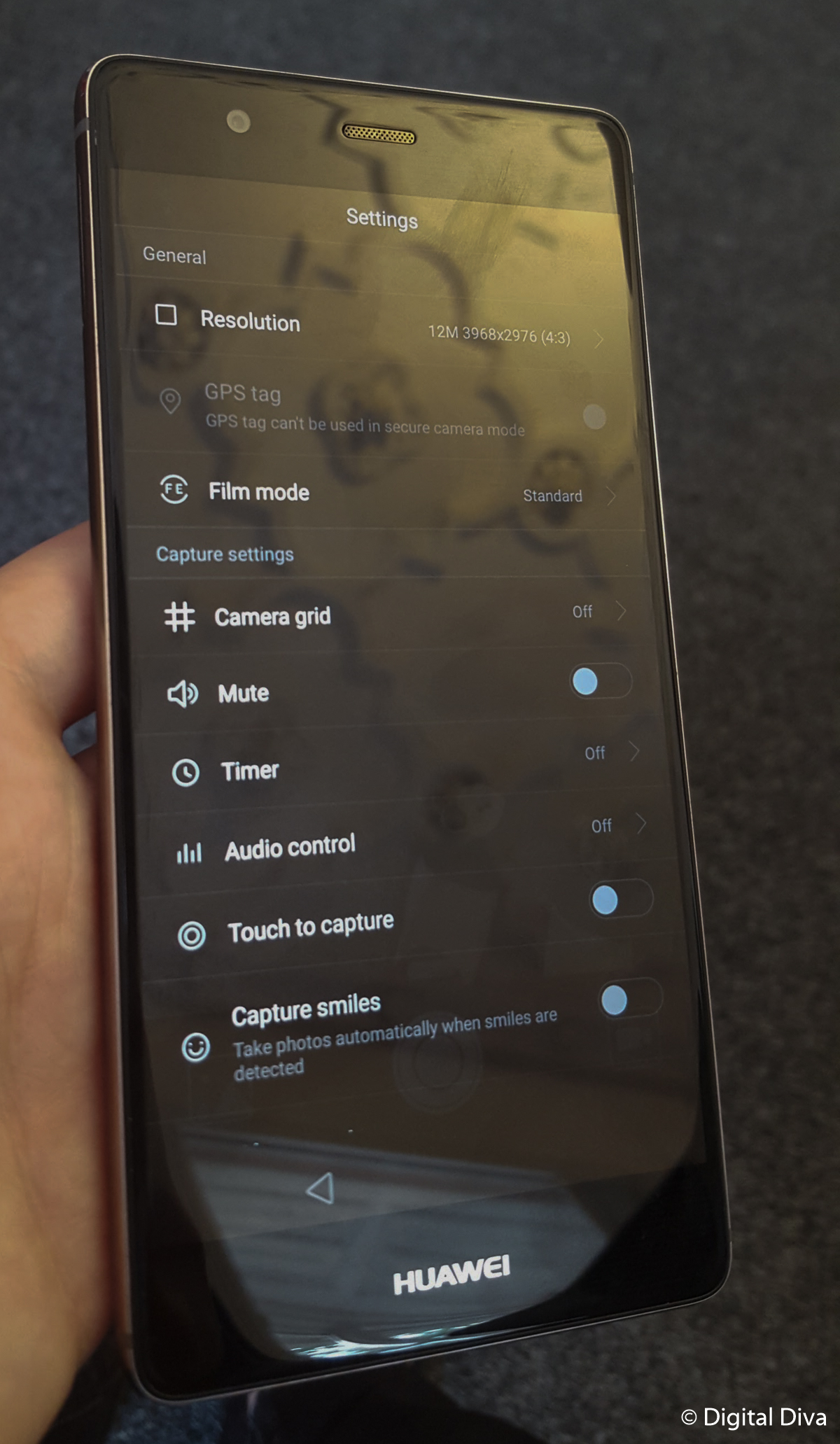 There’s the usual beautify functions that seem to come as standard on smartphones these days. I can’t imagine setting it to level 10! Haha! I usually have it turned off or maybe on level 1 or 2 if I’m feeling a bit yucky. 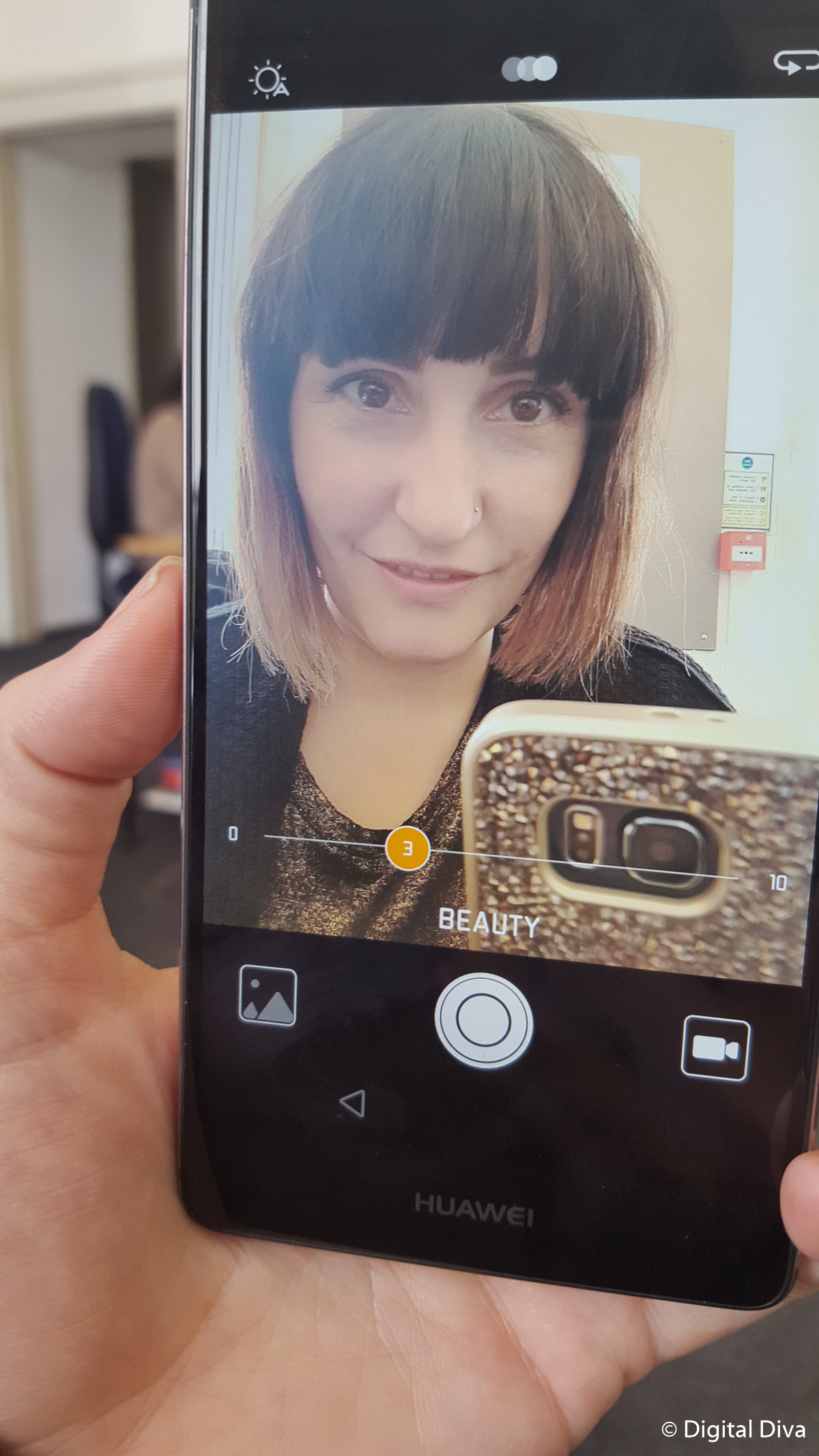 The pro settings of the cameras are so easy to use, you can adjust the ISO, white balance, focus and much more all with the slide of your finger. 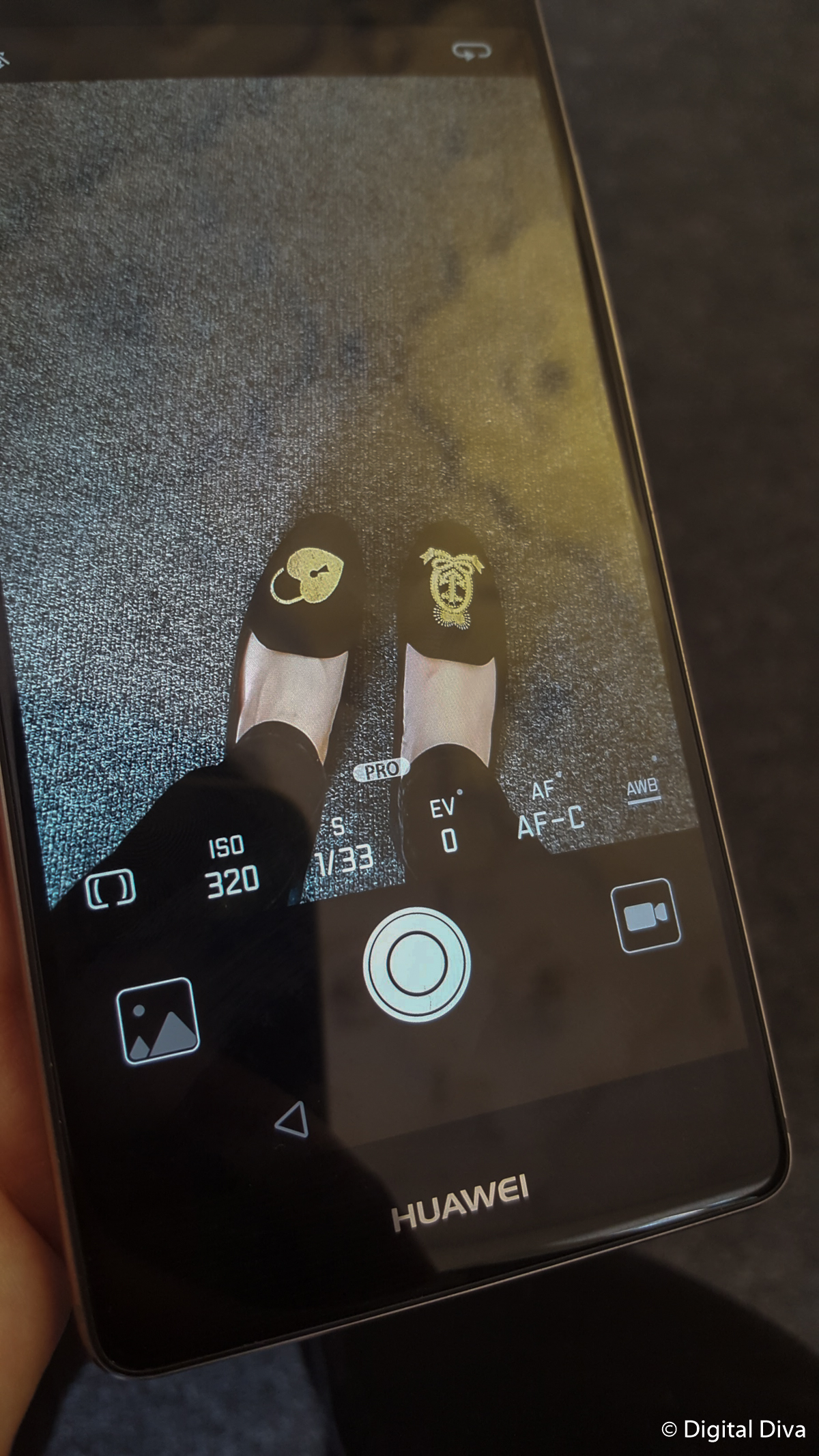 Pretty damn awesome! I’ve never been as impressed with a cameraphone, ever. I specifically took some photos in low light (something that smartphones usually struggle with) to see what it could do… 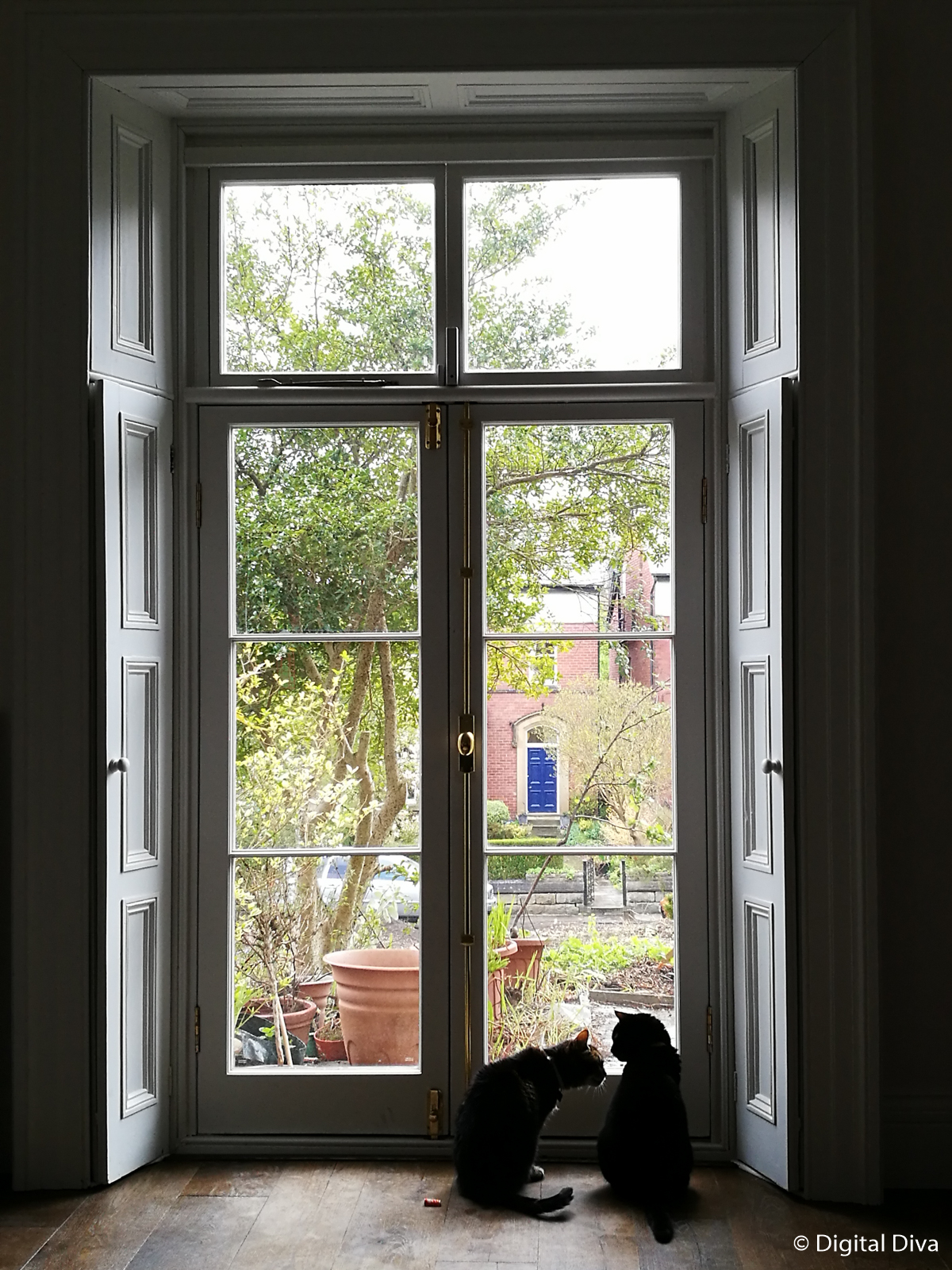 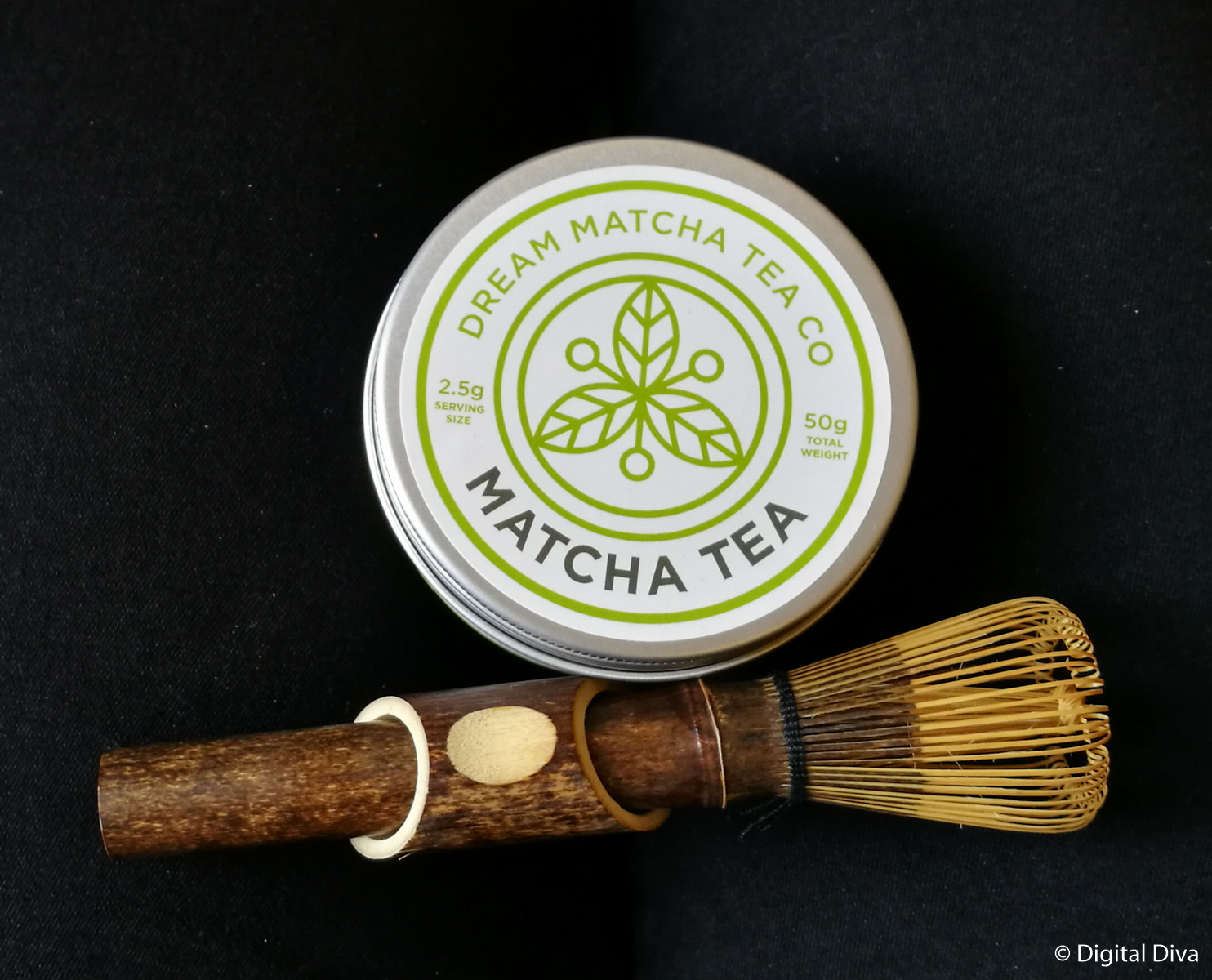 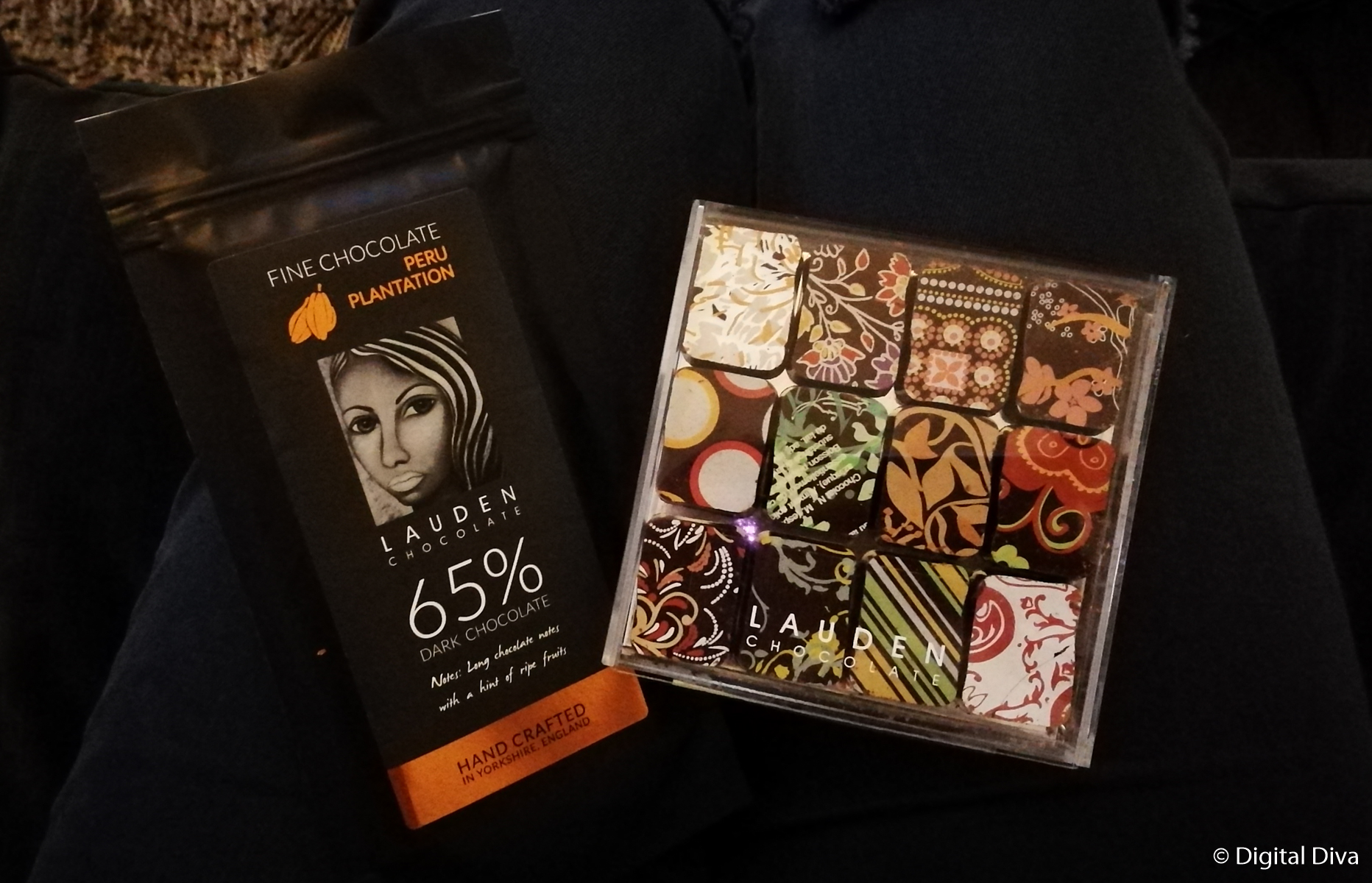 All were taken in my living room in very low light conditions. I think you’ll agree that the photos are quite astounding for a cameraphone, aren’t they?

I’ve taken some comparison shots using my Samsung Galaxy S6. I turned the settings to the same for the test.

Let’s start with one of the meeting rooms at work – pretty low light inside, looking out into the woods (I work in a lovely place). The Samsung fares quite well and manages to capture lots of nice detail outside in the light (most cameraphones struggle with this type of photo and bleach out the outside)…

…but then look at the Huawei P9:

Wow – so much more detail and the contrast is much better. 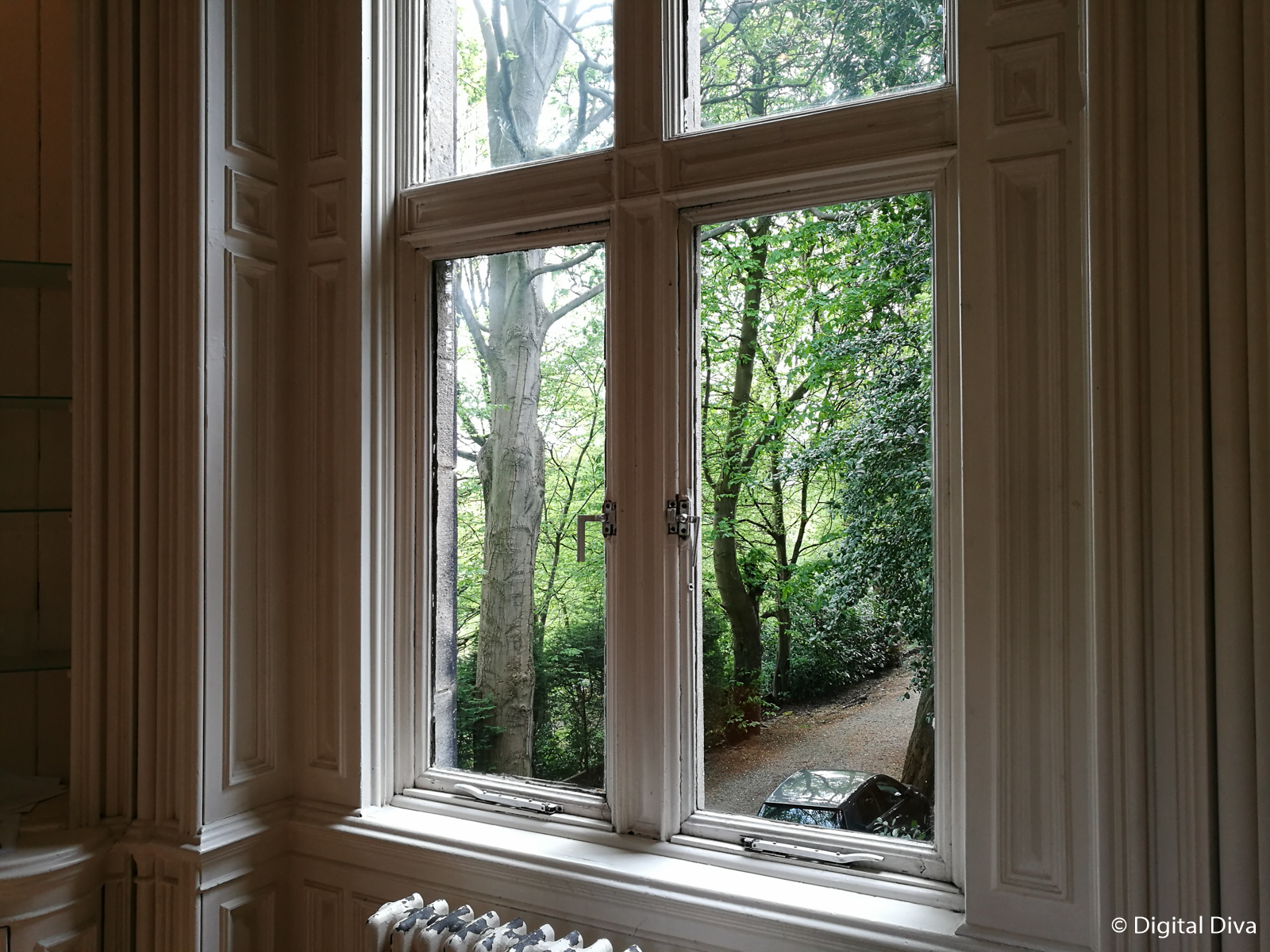 Let’s do a selfie with the front-facing camera. The light isn’t amazing in the room I’m in and you can see that the Samsung is struggling a little with the light… 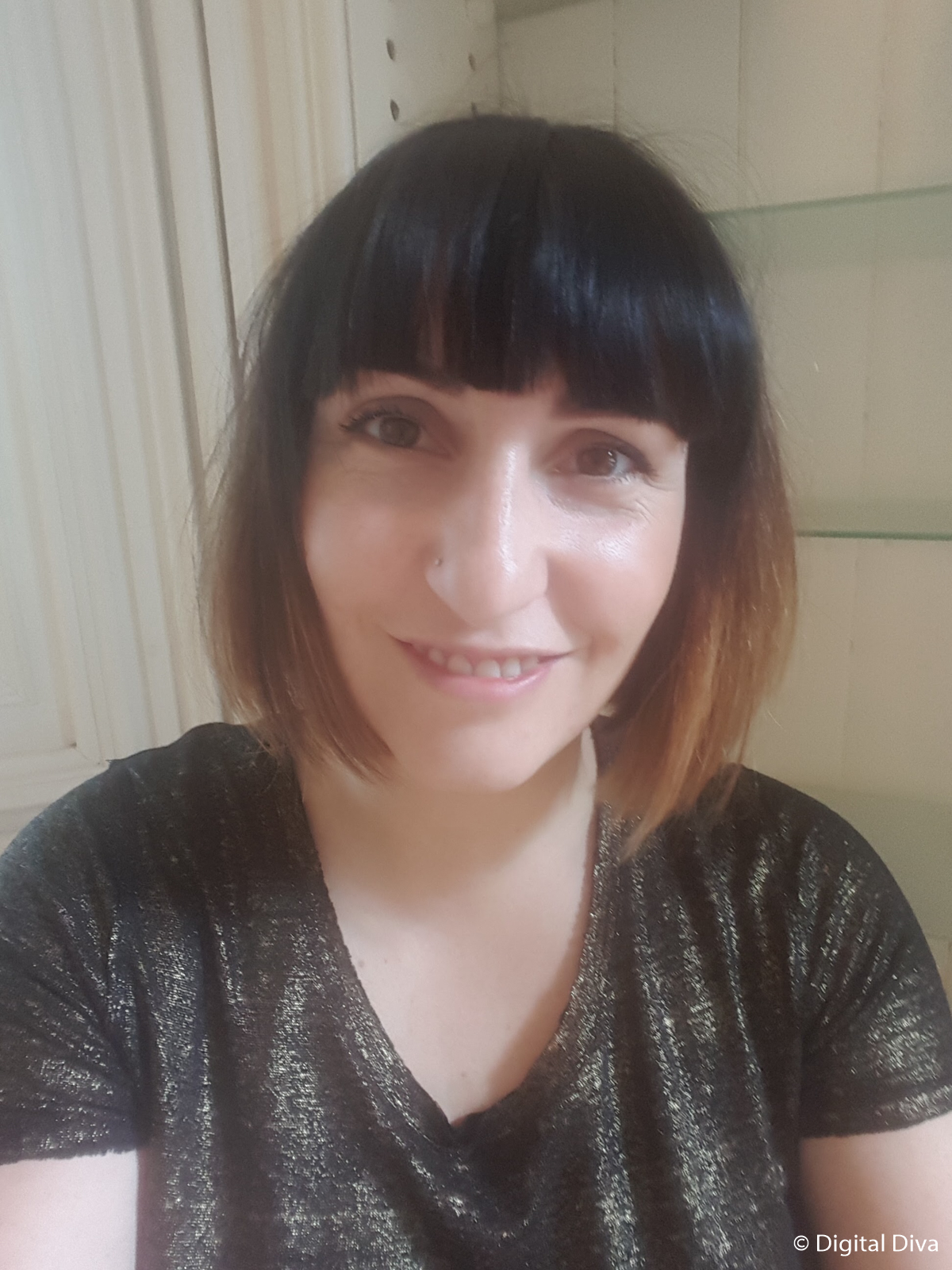 …but the Huawei is clear as a bell. 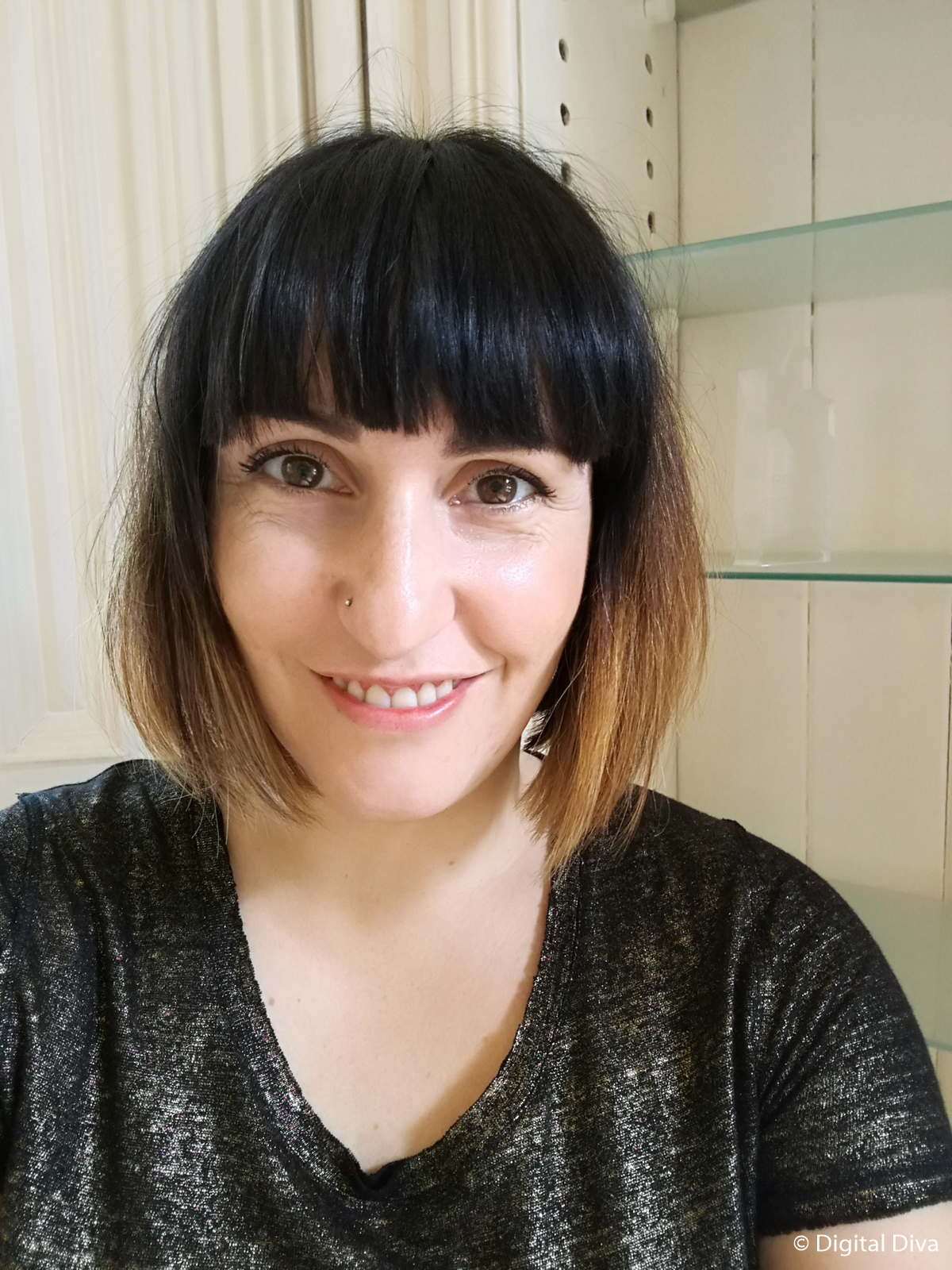 Let’s try some colour. We’ve got some lockers at work which are the perfect test.

Not bad from the Samsung… 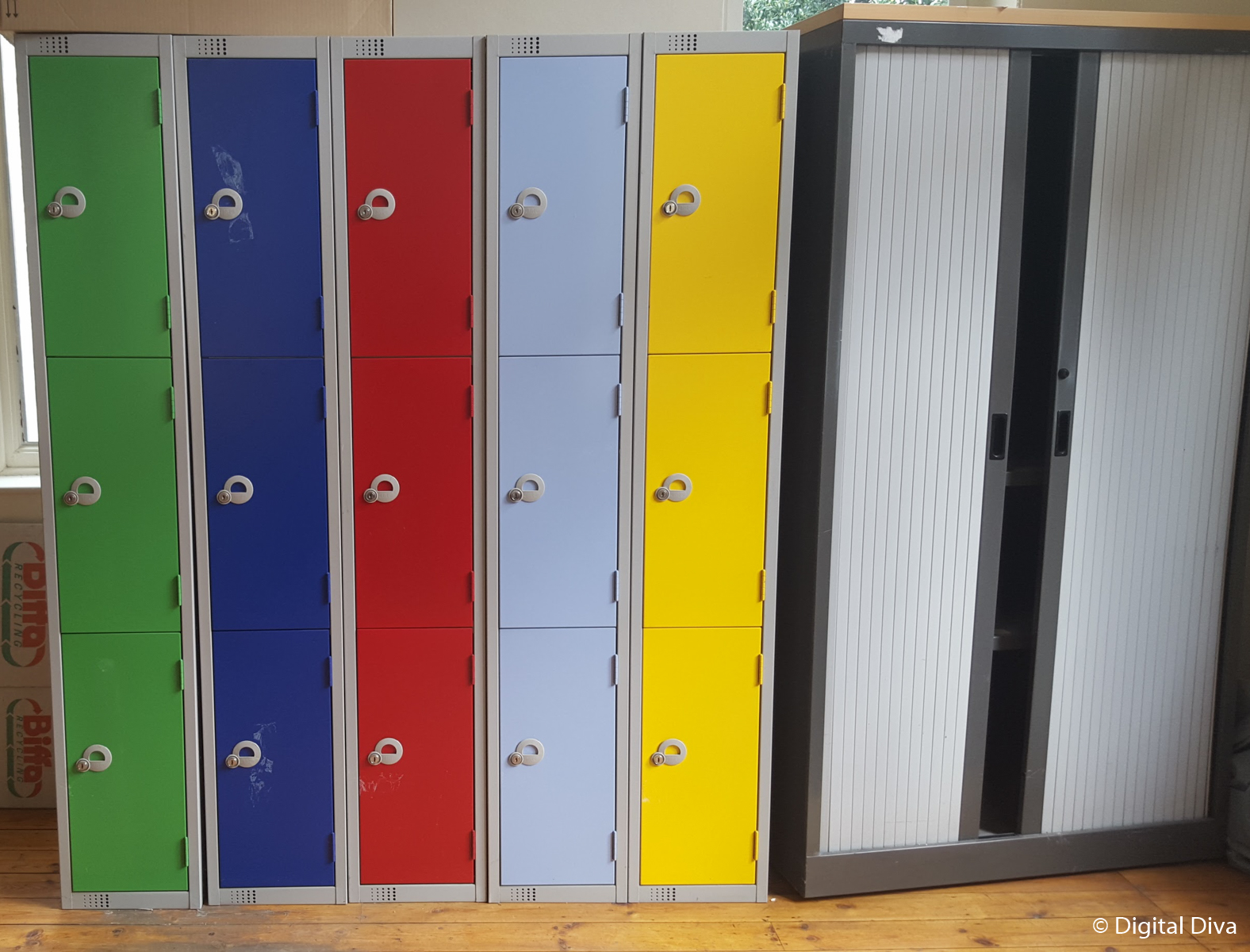 …but the P9 just beats it I think, the colours are more vivid. 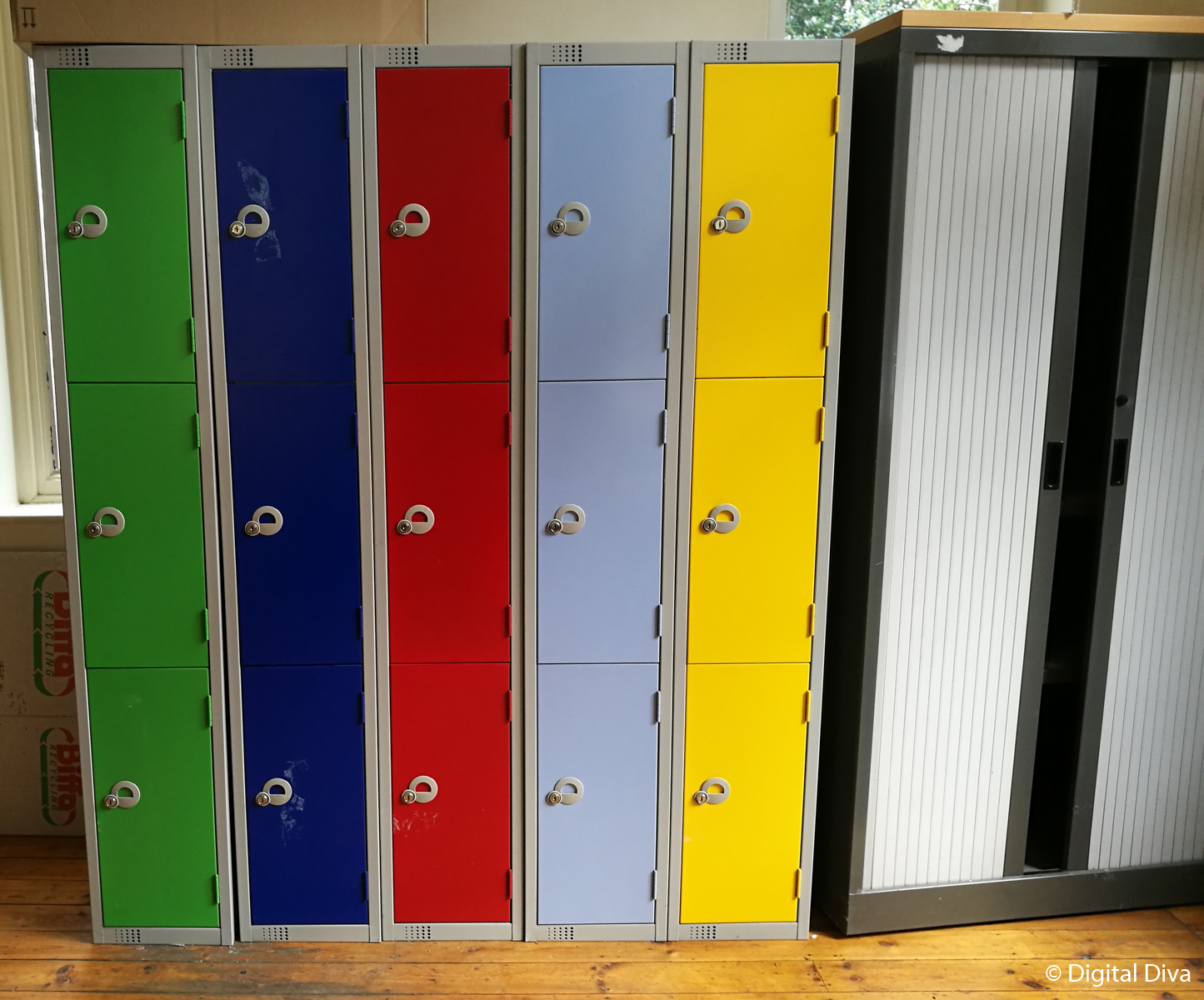 Onto some nature. Our garden at work takes a pretty picture… 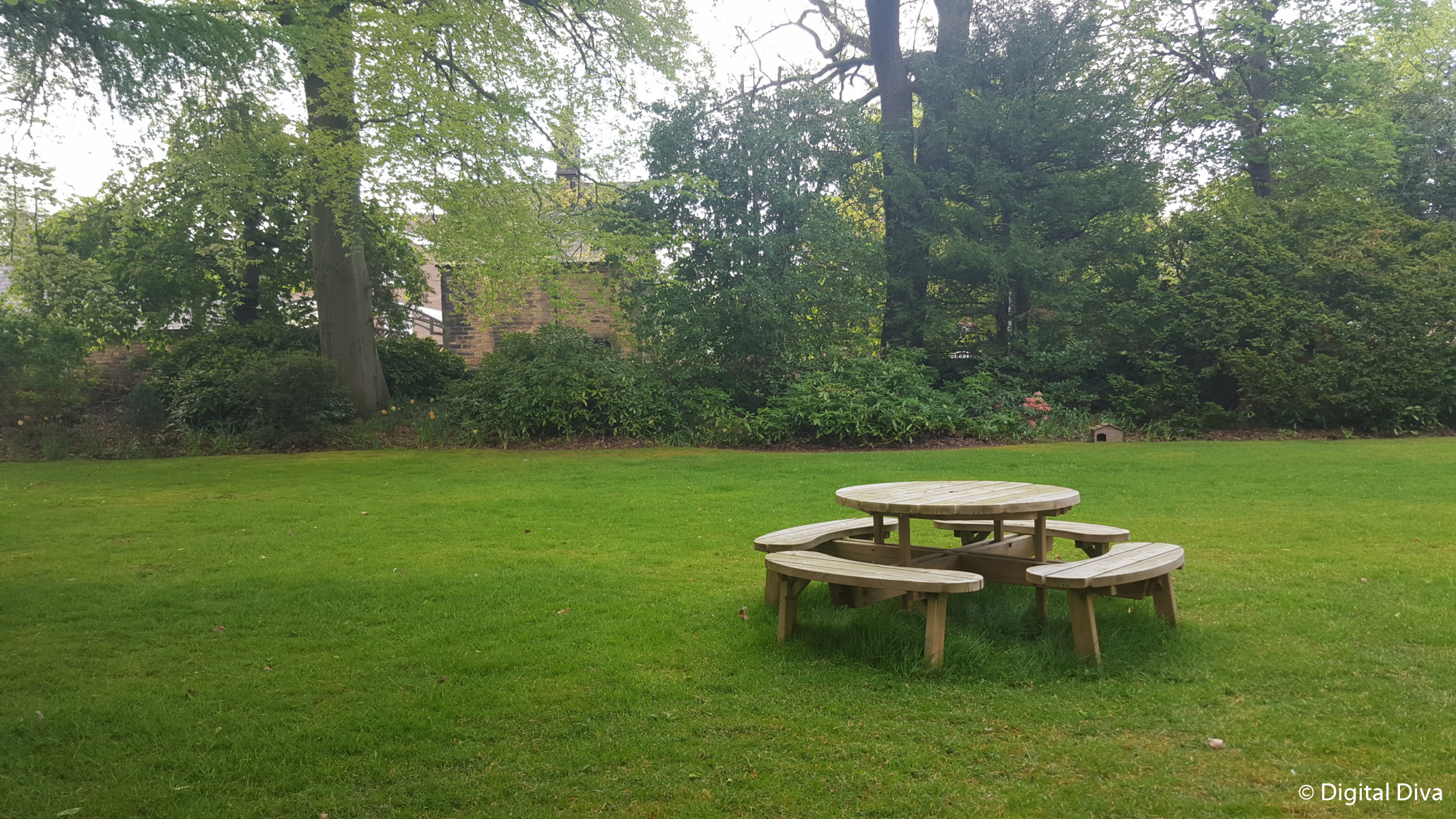 …especially on the P9! As you can see the contrast is much better. 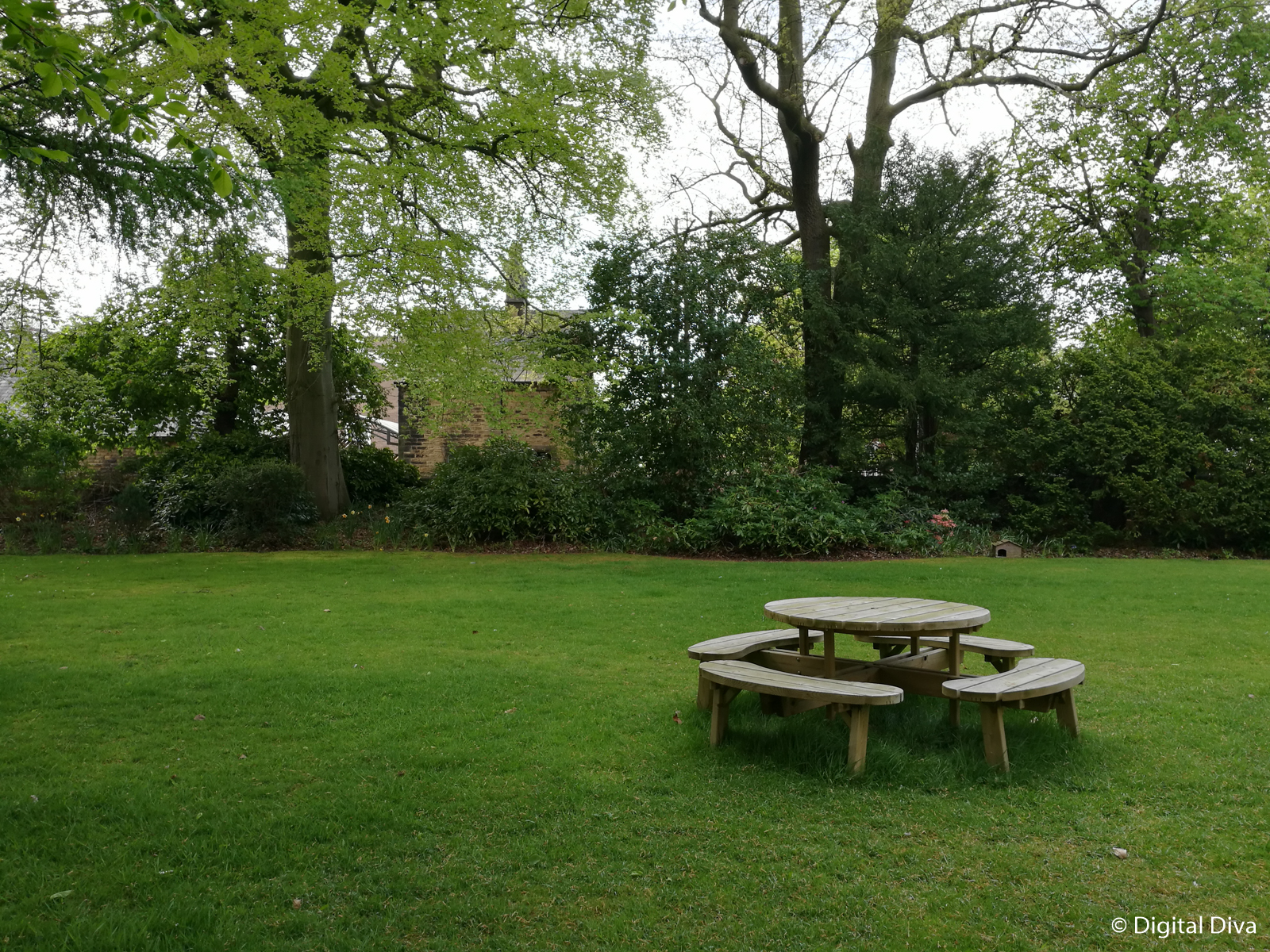 And finally, here’s my shoes (I bloody love these smoking slippers at the moment)…. 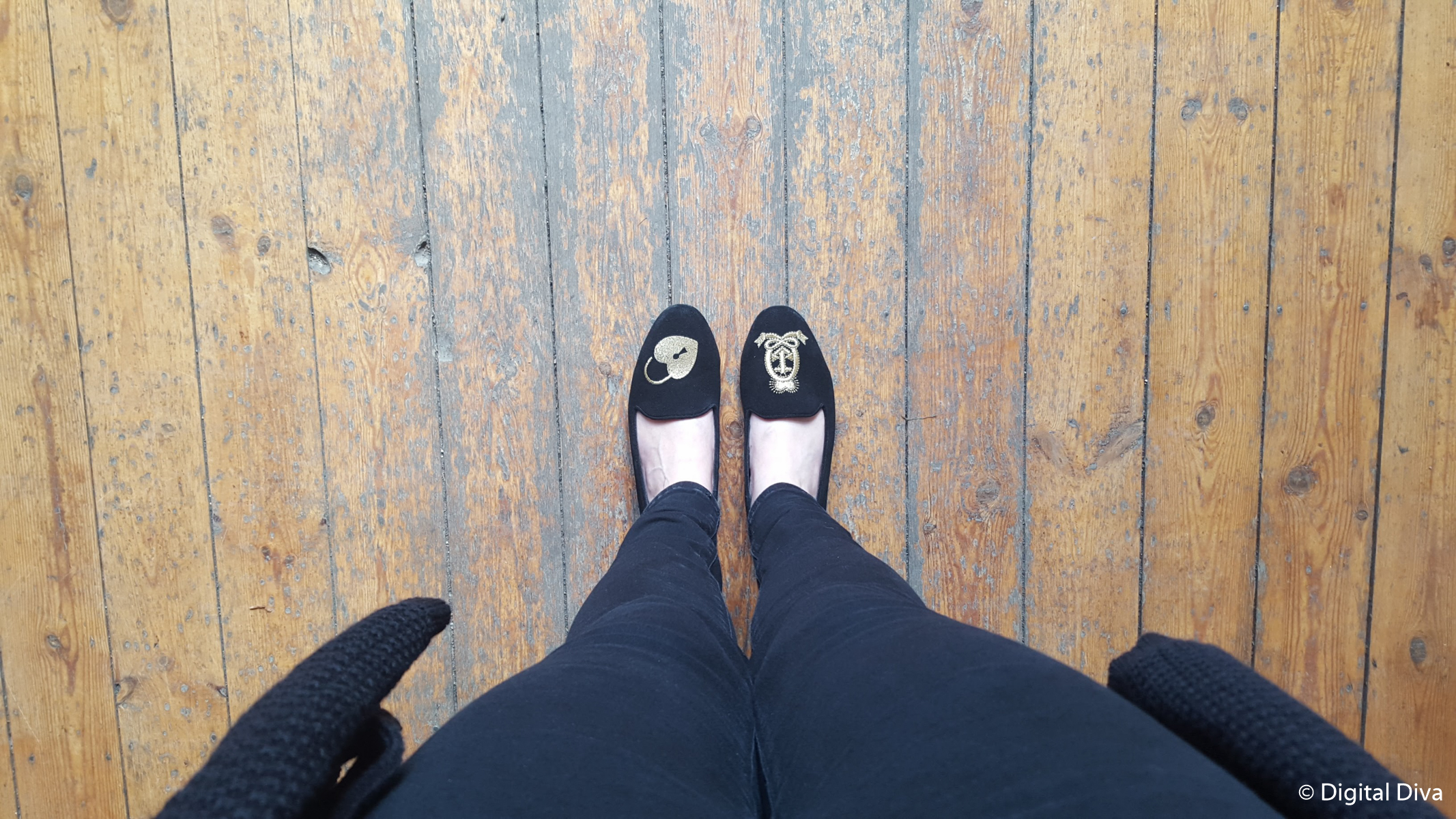 As you can see, the blacks are much blacker with the P9… 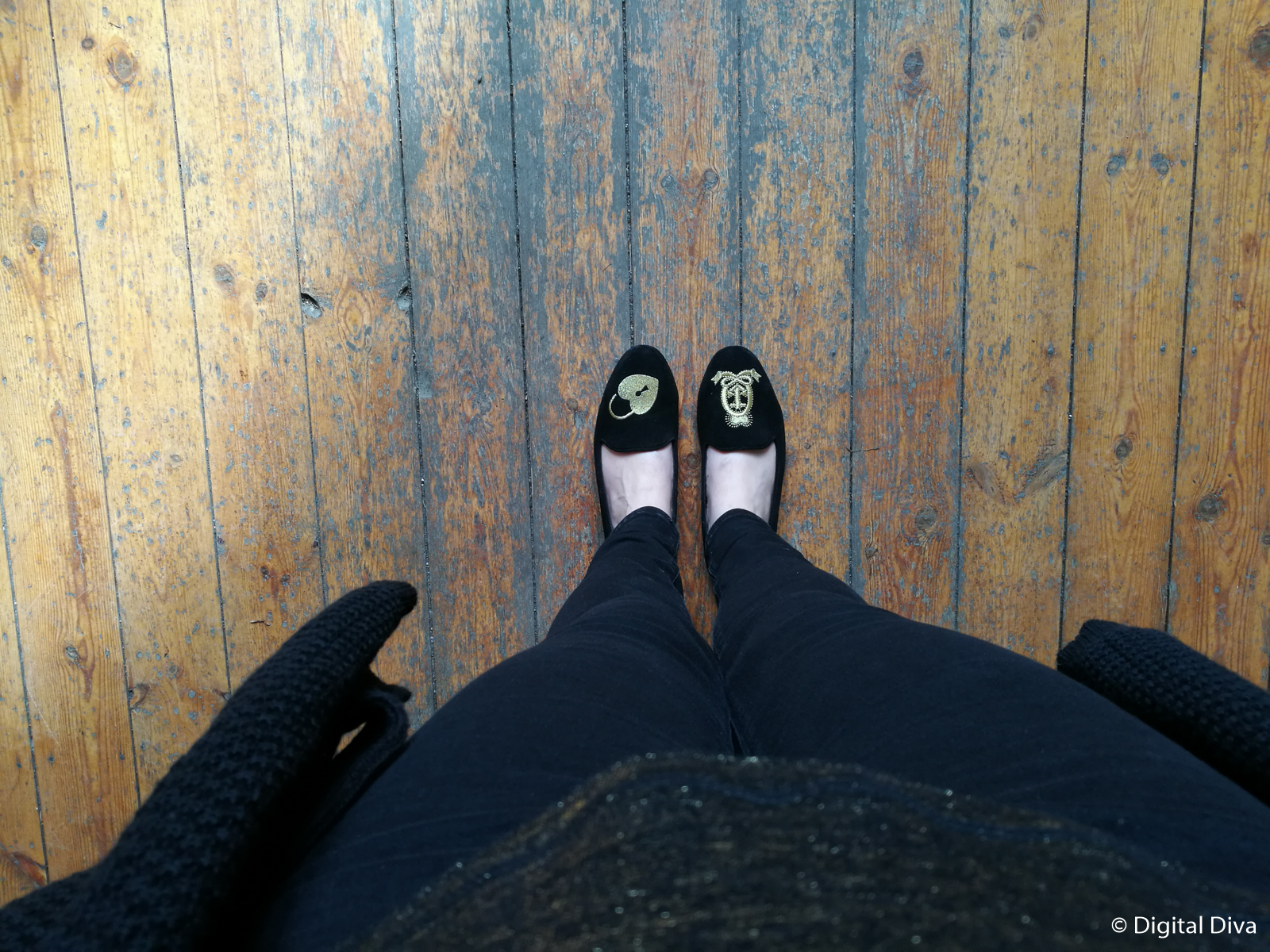 So, I think it’s pretty clear which smartphone wins!

I didn’t do a comparison for the video, but I did do a vlog with the Huawei P9:

I have to say, I did forget to turn on the image stabilisation…so it’s a little bit jerky. It’s much better when you turn that on! The colours are a bit too vivid out of the box from video with the rear facing camera. I had to mess with the settings to try to turn them down a bit (after I did this vlog).

What else do I like/dislike about the Huawei P9?

The interface, although it gets a little bit slated in some tech reviews, is actually pretty standard and I thought was absolutely fine. I couldn’t recorder my apps in A-Z order like on my Samsung, which was a little frustrating (you have to spend a while reordering and putting into folders), but that was a minor gripe.

The touch screen isn’t quite as responsive or accurate as the Samsung, but again, minor gripe.

Everything else was really as any other Android is…not much to say about all that, it was just…err…normal.

Snapchat was the one thing where the Huawei fell down for me…taking photos was absolutely fine, but taking video…another story. It’s basically unusable – it’s very jerky and the autofocus goes crazy. The hard thing for the Huawei P9, is that it’s most likely due to the Snapchat app – it’s well known that the app doesn’t take great quality photos or video and they obviously haven’t prioritised making it work well on Huawei.

I’ve included a little example here (wait for it to buffer, the slight jerkiness at start of video is due to that):

As you can see, the P9 Snapchat video isn’t great. I Googled the issue and found that a few other users of both the previous P8 phone and the P9 also had the problem….then I reached out to Huawei to see if they could help. They said they hadn’t seen the problem before, which surprised me after seeing other comments online. They advised to clear my cache and ensure any updates were done. I did that and the video did get slightly better…but the video you see is after I did all of that.

So, what did I think overall of the Huawei P9?

I thought it was a really excellent cameraphone…very nearly perfect for bloggers, vloggers and actually pretty much anyone who wants to have a decent phone which takes exceptional photos. I don’t need a new phone at the moment (I’ve only had my Samsung S6 around 8 months and I’m trying to make myself wait at least 12 months till I swap), however I nearly went out and bought the Huawei P9 after seeing just how good it was. The only thing that stopped me was the Snapchat issue. Snapchat is fast-growing app, but for audiences outside of 16-25, it’s still fairly niche…so for many, it really won’t be an issue at all. For me, it’s definitely an issue – I don’t want to not be able to take Snapchat videos.

So, I’m going to watch closely to see if they resolve the issue. If they resolve it, I would buy this phone in a heartbeat. If you don’t use Snapchat, I’d advise you to absolutely go buy one right now. It’s a great phone and the photos wipe the floor with anything out there at the moment.

That said, HTC are just releasing their new smartphone with what they say is the ‘best in the world’. Bold claims! There’s a quick comparison of the phones here, which doesn’t go into a lot of detail, but the tech specs do suggest that the P9 may still have the edge on HTC. I Googled some more and did find an article which compared the cameraphones (along with some others) and the results were very surprising to me…

The LG G5 was the clear winner (based on votes on photo comparisons from the public), followed by the Samsung S7 and iPhone 6S Plus. The Huawei P9 was actually 6th place, just in front of the HTC 10. Huh? I’ve tried an LG G5 and I wasn’t impressed AT ALL with the camera…I’ve not tried the S7 or the iPhone 6S Plus, but iPhones have always had terrible cameras…I’ll find a friend with one to try it, but at the moment I’m chalking that up to Apple fanboys/girls voting for the iPhone just because it’s Apple (note: I’m not an Apple hater, I’ve owned iPhones and I own an iPad which I love…I’m just honest about the iPhone’s limitations). Also interesting to note from reading the comments on the article, which did give lots of good info (they questioned the article’s methodology)…since that test, the HTC 10 has had two camera updates which really improved it.

I want to give the Samsung S7 a try after seeing that article…but in my own experience, the Huawei P9, if you play with the camera settings to get the best out of it, is an absolutely amazing cameraphone. If you’re in the market for a new phone and don’t use Snapchat a lot…go and test it out.

The Huawei P9 is available from the usual suspects and you can get it free on contract, subject to tariff. You can read more about the Huawei P9 on Huawei’s website.

* Please note that the Huawei P9 was given to me for three weeks for review purposes. I sadly didn’t get to keep it, but had a lot of fun trying it out! As always, my views are very much my own.