I’ve turned into THAT girl. Yes, the one that asks you what running app you’re using…the one that does those Saturday morning Park Runs. Well, ok, I’ve done like….one.

I struggle with exercise, to fit it into my life and to…errr…enjoy it! I’ve always wanted to love running but never managed it…seeing it as a chore, a way to make myself slimmer – I’ve never found that very motivating if I’m honest.

The way I managed to get myself running finally was down to three factors:

1) I told myself I was going for a brisk walk

I like walking. I figured if it would do me good to go for a walk for 30 mins and if I wanted to run for a bit of it, well then that would be fine too. This took all the pressure off. I didn’t HAVE to run.

So, earphones in (Drummatic Twins, Plump DJs, Krafty Kuts…I’m a breaks gal) and my walks started to have a few more bits in them where I’d jog for a bit.

So this got me thinking that maybe I could run…kinda. I found out a friend of mine, Kay from Cheery Little Thing, was also doing a bit of running…so I tentatively messaged her and asked if she wanted some company when she ran. Kay said yes and we started running together once a week. Luckily, we were both at the same stage…bursts of jogging, with periods of walking.

Walking and running intervals: This is pretty much how a couch to 5k app will get you started…I’ve used those apps before and being the contrary person I am, hated the whole ‘run now…walk now’ thing. I just don’t like being told what to do by a beep! They do it to pace you, which is what you need, but running with Kay reminded me of what I used to do when I ran at high school…

3) “let’s go from this lamppost to that bus shelter”

Kay is great at pacing herself and uses the tried and tested method of…whilst we’re walking… “ok, let’s run from this lamppost we’re about to get to…..to that bus shelter / lamppost / bin / corner over there”. It means you know in advance what you’ve got to do on this next bit of running. No cowering from the overly chirpy beep.

After a few sessions with Kay I got talking to my friend Arianne who persuaded me to do a 5k Park Run with her (the Hyde Park/Woodhouse Moor one…it’s flatter than the Roundhay Park one – there’s loads more around Leeds too though). The Saturday morning came and I was pretty nervous, Kay and I had only really been running around 3-4k each time and I was worried I’d really hold Arianne up as I’d need to walk a bit more than her. Luckily, we found we were paced very evenly. We did a lot of “let’s run from here to over there” and while we weren’t in the first half of people finishing (mums running with pushchairs kept passing us!)…we also weren’t last either. We managed it in 42mins, which wasn’t too bad for our first attempt! 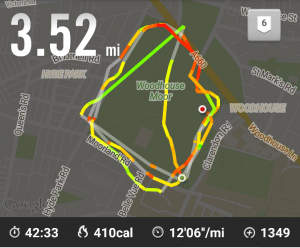 It was definitely challenging, but do’able. It gave me the confidence I needed to keep at this running thing.

Since I did the park run last weekend, I’ve done a 4k on an evening with Kay and a 5k on my own this weekend…so maybe, just maybe, I’ve got it in me. 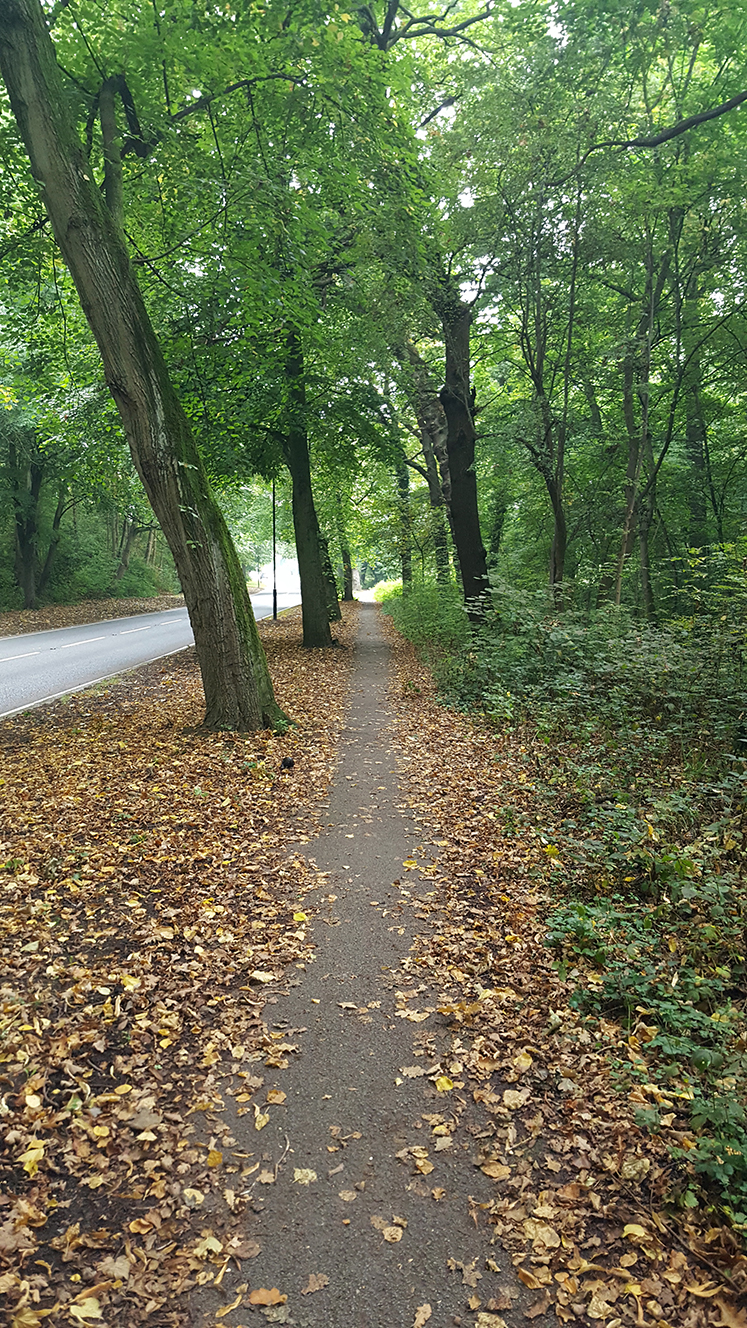 Half way through my 5k this week

I’m using both Nike+ Running and Strava as my apps. Nike because that’s what I started with as it was connected to Samsung Health on my phone…and Strava because it seems, well, loads better! (e.g. more friends are on it and I’ve figured out how to set it to kilometres, not miles…).

Fingers crossed my enjoyment continues and big thanks to Kay and Arianne for being my excellent running buddies…and also to my mate Sarah, who is motivating me from afar (she’s now loads faster and runs most days…and I’m totally not at that level, but I’m dead proud of her for doing it)  xx